The Dexter Area Historical Society, the first local society of its kind to organize in the State of Michigan, was formed in 1971 with Norma McAllister and Frank Wilhelme as leaders. Norma (Kolander) McAllister, born in 1919 and raised in a home on Huron Street in Dexter, is considered the founder of the Society. By the time she graduated from Dexter High School in 1937, she probably knew everyone in town. Over the years, she created files on people, places and events in Dexter History. Prior to her death in 2012, she shared the files with the Dexter Area Museum. Frank Wilhelme had taught history at Dexter High School and was our first President. He went on to serve the Michigan Historical Society in many roles.

The first meeting was an attempt to get a group together interested in the idea of forming a historical society. Held at the home of Bob and Joanne Hoeft, the group agreed that the Village of Dexter and the four surrounding townships of Dexter, Lima, Scio and Webster should be included. In 1971 a second meeting was held at the Dexter Library on Baker Street with the hopes of involving some business people, however, only one attended. Various ideas about what the Society could do were discussed and it was decided then to hold a public meeting in July of that year.

Frank Wilhelme took charge of the July meeting and explained ideas discussed previously. There was unanimous approval to establish a historical society to be called the Dexter Area Historical Society. The Honorable Judge Ross Campbell of Ann Arbor was there that evening and showed slides of the Dexter Area. Norma’s sister, Marian Ehley, was kept busy signing up members and by the end of the meeting about seventy-five had joined and paid dues. Within a short period of time well over one-hundred had joined the society.

Shortly after becoming organized, Frank Wilhelme became president of the Historical Society of Michigan and during his travels throughout the state he promoted the Dexter Area Historical Society as an example of what a group can do. Before long other towns and groups began forming local societies.

The first board of the society consisted of a president, vice-president, secretary and a treasurer, plus one person to represent each of the four townships and one from the village. 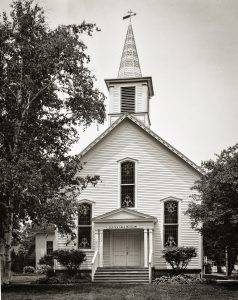 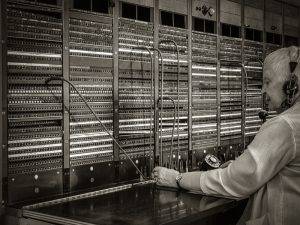 An exhibit at the museum

Soon after the society organized, the board learned that St. Andrews Church was planning to build a new church building on the site of their original church. The board members met with the church board to discuss the possibility of acquiring the old building for a museum. After the church board met with their congregation, it was agreed that the church would give the building to the society to use for a museum providing the society moved the building. The church membership offered to allow the Society to move it across Fourth Street to a part of their parking lot. A seventy-five year lease on the portion of the parking lot was granted by the church. By January, 1974 the building was on the new site.

In the meantime the Dexter Library gave historical collections, housed in the library, to the society. Norma McAllister also worked on a committee with the Great Lakes Bank to collect old photographs of Dexter to have copies made for a book of photos the bank was to offer its first customers. These photos are now a permanent part of the museum collection.

The Dexter Area Historical Society filed for and received 501 (c) (3) Federal status so monies and donated items to the museum or society could be deducted from the donor’s Federal taxes according to its value.

The Sesquicentennial was celebrated in 1974 and Norma McAllister worked on a number of projects for that event such as the play depicting the history of the village, a book on the history of the area, obtaining a “roving photographer” to take photos of events, etc. With the help of David and Mary Hosmer, who owned the funeral home during this time, Norma organized the filling of a casket which was placed at the front west corner of the museum. A marble marker, donated by Arnet’s Memorials on Jackson Avenue, was placed at the site with the inscribed date when it was to be opened in fifty years. Some of the profits from the Sesquicentennial event went to the Dexter Area Historical Society. With these profits, along with some personal loans from members and help from a Kiwanis sale, we were able to pay all debts.

From the beginning, discussions were held with regard to ideas on how to raise money. Joanne Hoeft approached Norma and asked if the Historical Society would consider sponsoring a craft show. Norma presented the idea to the board for an arts and craft show whereby a small entrance fee would be charged and those craft people contacted to sell their items would also demonstrate their particular craft. These were very successful until the 2012 Tornado forced cancellation of the event. Shows were held in 2013 and 2014 but were dropped after that for various reasons.

Big changes to the Dexter Area Historical Society came in 2000 when the University of Michigan announced that they were going to sell Gordon Hall. The Society was faced with a new challenge and went to work to save the Mansion that was built from 1841 to 1843 for our village founder, Samuel William Dexter. As had happened in 1971, a group of interested citizens began meeting to discover what could be done to acquire Gordon Hall. Three gentlemen who took leading roles in this adventure were Paul Bishop, Gilbert Campbell and Paul Cousins. From the beginning the whole community was involved. The school kids had various money raisers, pledges came from individuals and businesses, and in general there was a great outpouring of support.

Thanks to the work of many members and the community as a whole, the Society was able to bid one and a half million dollars. The bid was successful and the Society took procession of Gordon Hall in March of 2006. The Society is proud of the fact that debt was retired in 2015. The future plans for Gordon Hall are to restore it historically to what it looked like in 1860s. It will continue to be used for special events as well as being rented it for weddings or other special occasions.

The Dexter Area Historical Society holds special events to support maintenance of facilities and provide services to the community. Although the Pioneer Craft Fair has been dropped, the Christmas Bazaar remains and Civil War Days at Gordon Hall have been celebrated from 2011 to 2015. Christmas at the Mansion was added in 2011 and Gordon Hall Days was recently introduced. Although the topic will change every year, Gordon Hall Days will give us a great chance to educate the community on the History of the Dexter Area.

The Dexter Are Historical Society has come a long way, but its purpose remains “to preserve our history and inspire our community to connect the past with the future”.