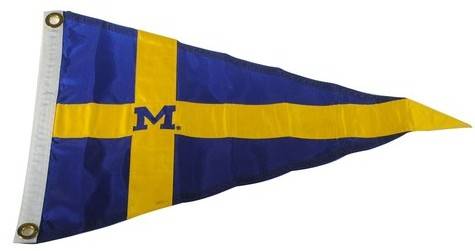 Established in 1938 with what was probably the most meager start of any club founded on the University of Michigan (UM) campus, the Sailing Club was organized as an off-shoot of the Quarterdeck Society, an undergraduate honor club of Naval Architect and Marine Engineer students. Most of the original members were sailors outside of college and wished to continue the sport during the school year. The club had several definite purposes: (1) to provide for those interested in sailing a chance to indulge in their favorite sport. (2) To give those who wish to learn to sail a chance to do so easily and inexpensively. (3) To enter into sailing competition with other schools in the Big Ten and in the East.

To get things going, a handful of students chipped in $30 apiece to buy a couple of 12 foot dinghies named Double Trouble (DT)“Frostbites” designed and built by Murray Wright, a UM alumnus. The “Frostbites” were so named as their light weight and small size enabled the boats to be sailed late into the fall as they could be lifted quickly into and out of the water. The boats were financed entirely through club membership and no University backing was received.

Saving enough money from its $10 membership dues to purchase a dinghy or two a year, the club continued to expand until World War II when military service called many of the sailors. Although the club stayed active, expansion halted until 1945. Even then, club membership was limited by the number of boats owned.

It should be noted that the University considered this a club sport not a team sport. Any undergraduate student could apply for membership. Only this club and the ski club on campus offered competitive sport on a co-educational basis. Even without University funding, the UM Sailing Club (UMSC) was the first from the Midwest to become affiliated with the Intercollegiate Yacht Racing Association and became one of the founding members of the Midwest Collegiate Sailing Association (MCSA).

The sailing club was originally located on Whitmore Lake. As there wasn’t a boathouse on the lake, boat hulls were stored in the basement of an existing old roller rink building and it was said that students would hitchhike up from Ann Arbor with the sails. Aside from more boats, the club had great need for permanent quarters since only a limited number of craft could be kept in the building’s basement.

In the early 1950’s, UM’s zoology department provided research land on Baseline Lake to UMSC. The first clubhouse there consisted of a dirt floor garage with a storage rack system for the club’s racing dinghies. A small, separate concrete block structure containing two toilet changing rooms was built next to a septic field. In front of the toilets, a stone fire pit provided a warming fire during late Fall, early Spring and night sailing. A flagpole, donated by Detroit Edison, was erected around 1960. The UMSC flagpole bell was cast in the East Engineering Foundry in 1961 by Walter Pearce using the mold of the small bell design for the Saint Lawrence Seaway navigational aids. Around that time, a wooden floor was added to the garage along with a work bench on the North wall.

Finally in 1984, UMSC members volunteered their labor to construct a 26x50 foot boathouse equipped with a modern galley, changing rooms, heads, and storage space for their 1983 fleet of fourteen 470’s (a one-design sailboat) and 2 sailboards. Dues and $6,000 donated by former UM sailors helped to cover the material costs. The new facility provided both the club and Michigan Sailing team with a home base and facilities which came closer to those of other universities. The Michigan Sailing Team is affiliated with the UM Department of Recreational Sports. The sailing team, composed of UM undergraduate students, competes in racing events with other college and university sailing teams.

UMSC continues to be run as a cooperative and anyone interested in sailing is welcome to join (http://michigansailingclub.org). Members are responsible for mowing the lawn, repairing the docks and maintaining the boats and boathouse. The club currently has a fleet of 25 dinghies consisting of various one-design models such as JY15’s and Lasers plus an assortment of sailboards and paddle craft. Students who join the Michigan Sailing Team also become members of UMSC with access to the club’s boats. The Michigan Sailing Team independently owns a fleet of FJ’s and 420’s which are the standard boats used for MCSA regattas.

The early historical information for this article was obtained from the 1940-1953 University of Michigan Sailing Club Scrapbook, Bentley Historical Library, University of Michigan. I would also like to acknowledge the following current and former UMSC members: Carey Jones,  Andy van Staveren, Kevin Bosley, and Gus Miller, for photo and/or story contributions.