Hamburg: The Village with Two Railroads

Between 1835 and 1883, the only ways out of town were the old lndian trails and narrow dirt roads to Brighton, Whitmore Lake and Ann Arbor. Transportation was by foot, horse and wagon. Farmers wanting to get their produce and animals to market had to take them to Brighton or Ann Arbor for train transport. Merchants had to have supplies delivered from Ann Arbor by wagon. The sick had to travel to Brighton or Ann Arbor by horse and buggy as there was no doctor in Hamburg. Several attempts had been made to get at least one railroad stop through Hamburg, but that did not happen until 1883 when the Grand Trunk Railroad came through on its way to Pinckney. ln 1886, the Ann Arbor track was laid and Hamburg became known as the village with two railroads. By 1920 six Ann Arbor Railroad passenger trains and four Grand Trunk trains stopped daily in Hamburg bringing passengers and freight and providing a way out for Hamburg folks and their products.

ln addition to transportation, the railroads brought jobs to the community. Local people were hired to load and unload the trains, assist the stationmaster and work in the new businesses that sprung up near the tracks. The Hamburg House Hotel saw increased traffic as the trains brought more summer residents out as well as salesmen who used the Hotel as their base while traveling by horse and buggy to their customers in the area. The trains brought the world to the little farming community. The local general store could now stock products that were not available before. Newspapers, magazines and the mail would arrive daily, keeping residents current on world events.

A particularly popular train stop was at Lakeland, a few miles down the road from Hamburg viliage. Hundreds of people from Ann Arbor, Detroit, Pontiac and places in-between started their summer vacation by de-boarding at Lakeland, putting their suitcases and supplies into canoes and wagons to be taken to their cottages or one of the hotels on the lakes and the Huron River. ln return, the railroads transported thousands of blocks of ice, cut from Zukey Lake in January to Toledo, Pontiac, Ann Arbor and Detroit. ln fact much of this ice was used by the Ann Arbor Railroad to refrigerate theirs cars until electrical refrigeration became available in the late 1920s.

The railroads continued to supply Hamburg until 1960, when the last passenger train steamed through town. Automobiles and paved roads now transported people and trucks delivered supplies. The Grand Trunk Railroad line was closed and is now the Lakelands Trail, part of the Rails-to-Trails project that will link Lake Michigan to Lake Huron via a walking/bicycling and horseback riding trail across Michigan. The Ann Arbor Railroad is still active in a new life, delivering freight and providing excursion rides for people who want to ride the rails just like the 'old days'. 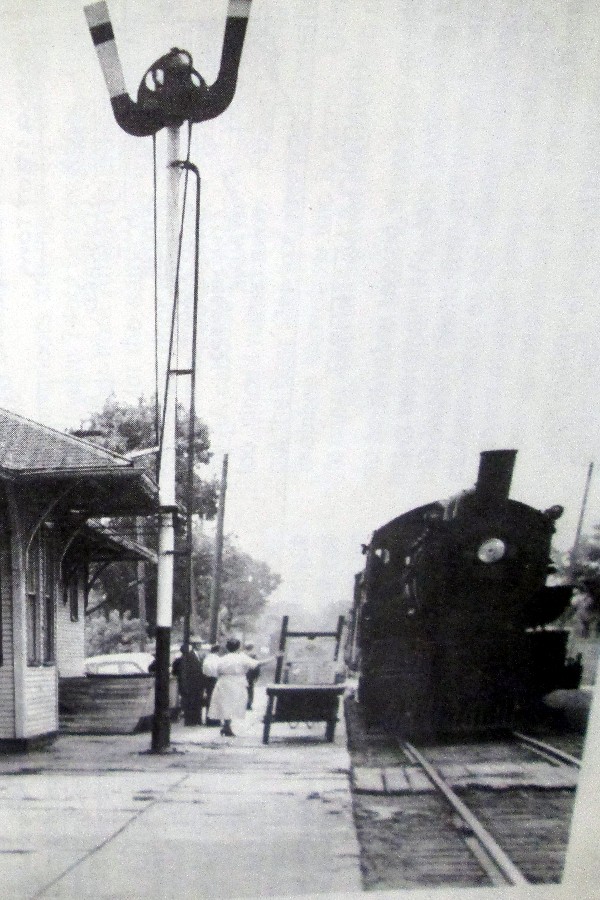 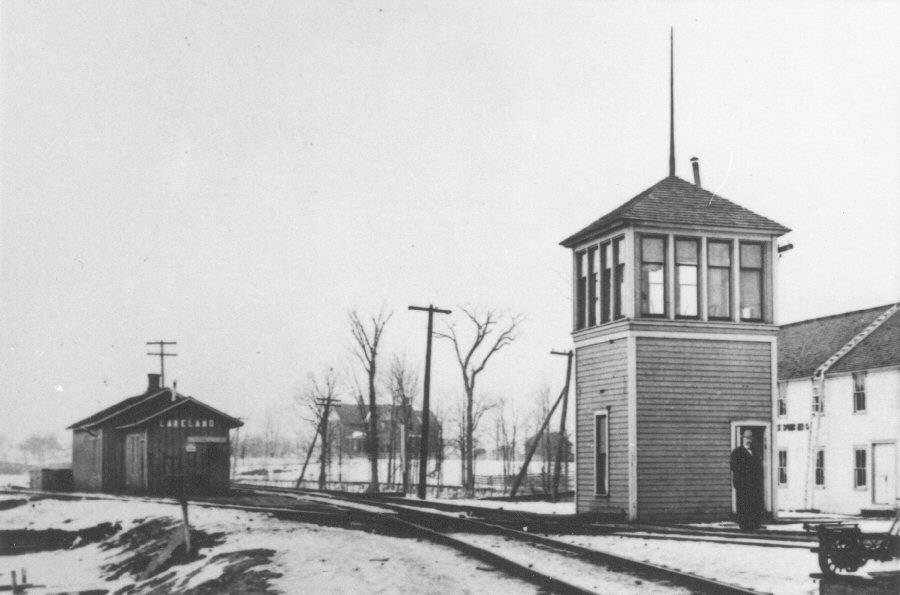 The railroad tower and depot at Lakeland. In the foreground the crossing of the two rail lines (Ann Arbor RR and Grand Trunk RR) that served the area is shown.