Before the advent of commercially available home refrigerators in the mid 1920’s safely storing perishable food items in the summertime was difficult to say the least. Canning, drying, root cellar storage were options “or” if you were fortunate enough to be close to a supply of ice blocks for your “ice box” you could manage.

The following story is about one of the many sources of ice for the companies which brought you a ration of ice for your “ice box.”

Location: Zukey lake in Lakeland, Livingston County Michigan. A small community on the Huron River chain of lakes. Circa the late 1880’s. A commercial company in Toledo Ohio built a huge warehouse between the Ann Arbor Railroad tracks and the banks of Zukey lake. The Toledo Ice Company erected this ice processing facility to supply the inhabitants of Toledo Ohio with ice for their “ice boxes.” The warehouse was immense, 300ft long, 60ft high and 60ft wide. The warehouse was accompanied by a bunk house where the work force slept, ate and if necessary given medical attention. It was managed by a local housewife who ran a tight ship.

The ice had to reach a depth of more than 13 inches before harvesting could begin to obtain blocks the correct size for home boxes. The manner of determining when the ice was thick enough was left up to a local gentleman who had a very unique method for making that determination. He would walk out on the lake and stomp his foot. He could tell from the sound made, if the ice was more than 13 inches thick. When the sound was right he notified the company in Toledo and declared it was “Ice Time.” This started a complex process. Once “Ice Time” was called, the process would continue until the building was full or they ran out of usable ice on Zukey Lake, other lakes or the river. In that event, Ice was shipped in by rail from further north to fill this warehouse. It was mandatory that the building be filled. All of the local people who were part of this operation began their work at this time. 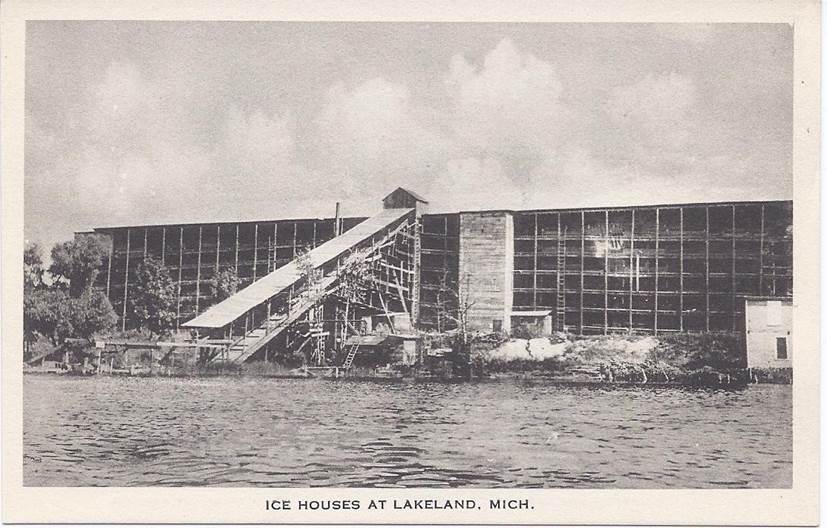 You will note in the photo of the warehouse a large ramp assembly was used to distribute the ice blocks to various levels and rooms. Trap doors in the ramp selected the level to be served while workers stationed at various locations selected the room. If a block was damaged and made unusable it was allowed to drop off the end of the rails onto a waste pile. The goal was to make the smallest pile possible. A steam engine was the source of power for the ramp and had to have a never ending supply of cut wood and water from the lake. This service was supplied by local farmers who welcomed the winter income.

In Toledo at this time the company used a unique method to get the manpower necessary for the project. A train was placed on a siding in Toledo and the word was put out on the street which announced “If you want a paid job with food and a place to sleep, get on the train.” Apparently it worked rather well.

Now began the process. The ice was sawed into large rafts (at first by hand and then later by a gasoline powered saw) then they were then towed to the saw mill on the shore. The sized blocks were put onto the powered ramp and directed through a trapdoor system for the level to be filled then skidded on a pipe arrangement by hand, to the room being filled.

When the first room was filled it was insulated with straw and sawdust then sealed off immediately, then the process moved to the next room. It was imperative that the rooms were sealed while still very cold. If the temperature rose too high the blocks would freeze together and could not be removed when needed so speed was critical. When the house was full the process ceased operation for the season. Obviously the work was hazardous. Noting photos, the clothing worn by workers on the ice appear somewhat inadequate and if one fell into the frigid water and was not immediately removed to a warm room, death could result.

When it was time to use the ice, it was loaded into railroad cars on the other side of the building and shipped to Toledo for distribution. In the mid 1920’s when home refrigerators became available the need for this kind of process diminished and eventually it slipped into history. The building remained standing for quite some time but eventually after being vandalized on numerous occasions an errant spark on its roof from a passing locomotive sent it into history also.

The complete story is available (if you can find a copy) in a book titled “So Melts The Ice” by “Billie Swarthout”. The above material was adapted from that book by Wayne Burkhardt. .