Hamburgians have taken pride in the fact that one of their neighbors became the first Democratic Governor of Michigan after the Civil War. We know as much as we do about Hamburg during the 1800’s because Governor Winans presented a report about his early days in Hamburg at a meeting of Hamburg Pioneers in about 1880.

The Governor was born in New York in 1826 but moved with his pioneering parents into a log cabin in Unadilla, west of Hamburg, when he was eight years old. Like most of the pioneers, Winan’s father was a farmer. Young Edwin stayed on the farm until his parents felt he was old enough to walk the 13 miles from Unadilla to Hamburg to live with his sister so he could go to school. A few years after Edwin moved in with his sister, he lost his father. His mother chose to move to Hamburg to be with her children and she lived in Hamburg Township until her death in 1852.

The Governor used his education in Hamburg well. From 1846-1847 he taught school and then he attended Albion College for two years. Later, he reportedly went to law school. He enjoyed an active political career as a state representative (1861-64), Hamburg township supervisor (1872-73), Livingston County probate judge (1883-86) and then Governor (1891-93).

Gold allowed Edwin Baruch Winans to go from being the son of a hard-working pioneer who died young to becoming one of the wealthiest and most prominent men in the township, even in the whole state of Michigan. Winans caught gold fever and joined the gold rush to California in 1850. He left Hamburg with two friends and four horses pulling a light wagon full of supplies. Four months later, the horses were footsore and worn down to skin and bones. The men loaded supplies on their backs and walked on until arrival in Placerville, California. One companion died along the way  and a second one died shortly after their arrival.

Winans successfully mined for gold for two years. He was smart enough to save his gold and organize a business that provided water for the miners. One way miners hunted for gold was by putting likely looking gravel or sand into a sieve-like box then running water through the box which washed away everything except the gold. The businessmen who provided the water had to be tough enough to prevent miners from taking more water than they were entitled to use.  Winans was selected from the group of investors to be the “enforcer” who would prevent water theft. He had a stocky build and was very strong from a life of hard labor. In the two years he patrolled the claims to regulate the water; he had to prove how strong he was only once. He had a fistfight with a miner and Winans was the winner.  After two years in the water business, Edwin Winans opened a bank in the mining town of Rough and Ready. The town, named after President Zachary Taylor, was located about 65 miles from Sacramento in Nevada County, California. He purchased gold nuggets and gold dust from the miners and sold it to the mint.

In 1855 Winans returned to Michigan by way of the Panama Canal. His plan was to marry Sarah, the oldest daughter of George Galloway, a leader in Hamburg public affairs and township treasurer for eleven years before his death in 1854, and then bring his bride back to California. However, Sarah who had been raised in comfort on her father’s 400 acre farm told Winans that she wouldn’t be able to adjust to living in a rough mining town. She suggested he ask her sister, Elizabeth, for her hand which he did. Elizabeth accepted and she accompanied him back to Rough and Ready where they had two sons, George and Edwin Jr.

In 1858, the Winans family returned to Michigan to stay. This time, Winans wore a Colt pistol on his hip as he was carrying two satchels full of gold coins. Elizabeth tried to hide some of the gold by sewing coins into a dress, but she must have hid too many as the dress was too heavy to wear. They again took the Panama Canal route and this time stopped over in New York long enough to deposit the gold in a bank. When they returned to Hamburg, they bought the Galloway farm from the late George Galloway’s son, Elizabeth’s brother. Their 400 acres encompassed all of the land that is now Lakelands Golf and Country Club. The farm surrounded Pleasant Lake on the west and south sides. They built a new home on the south side of the lake, near the spot where the DAR placed a marker on a large rock to honor the Governor. Later, the name of Pleasant Lake was changed to Winans Lake. Governor Winans may also be the only Hamburg resident honored by a state memorial sign which is located next to Hamburg Road in front of the cemetery where he was buried in 1894. 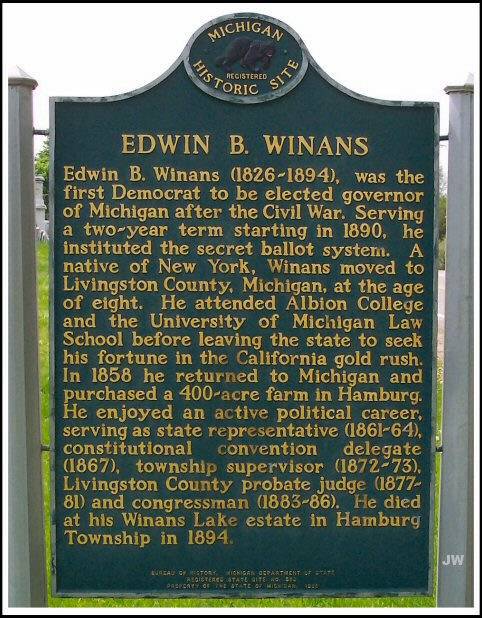 Documents from the Hamburg Historical Museum aided in the creation of this article.  The article was adapted for this site by Pamela DeTullio.