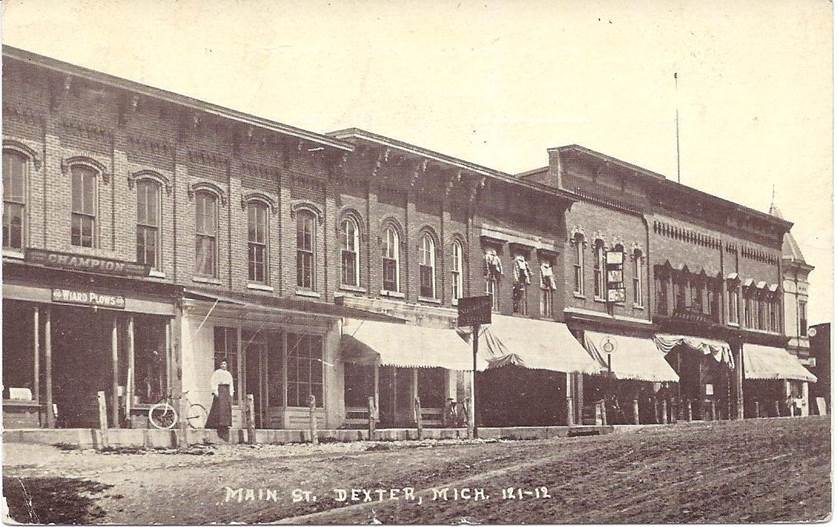 Main St. Dexter, Mich., postmarked 1913. A woman stands on the raised sidewalk on the north side of the street, a bicycle leaning against the building behind her. The signs on that building read, “Champion” and “Ward Plows. On the far right side of the block, you can see a building with a distinctive domed roofline, which still stands on the corner of Ann Arbor Street and Broad Street.

Dexter, Mich, circa 1930’s, 1940’s. The opposite side of the street is shown on this postcard, in later decades. Thriving businesses shown, left to right with their signs: First a building with a striped awning, then a Rexall Drug store, advertising drugs and films in the window; Roy’s Tavern, with a Coca Cola sign outside and advertising Beer and Lunch; Joe La Rose Ice Cream, Lunches Beer AND air conditioned! Banners along windows say Arctic Ice Cream, Albert’s Candies, Lunches, Fruits, Groceries, Meats, and Vegetables; side of the building after the alley advertises soap, and a playbill for Clifton Webb in “The Man Who Came to Dinner;” Steptoe and Arnsey Hardware selling Boydell Paints; last is Kroger!